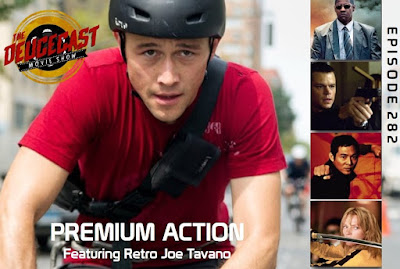 It's just the guys in the Deucecast Movie Show studios, with all producers out and Wit Stillman Fan, Terence Malick Fan, Brie Lover (Allison, Larson & cheese) and Film Historian Dr Earl on a Doctors With Only Some Borders mission, Mikey, Pinky & Dave decided to call up the RetroZap.com Podcasting Network guru and Podfather Retro Joe!

A little discussion about the RetroZap Network, then another round of See This, Not That, where Dave spins The Wheel of Movie Destiny (tm), giving you a great idea of what to see and what not to see with Star Trek films, guilty pleasures, and Eddie Murphy movies

Plus, Retro Joe's quick beef with Friend of the Show Scott Ryfun... and movie haircuts.  And more defense of Superman III from Pinky.  Plus, a special guest returns to the studio.

Then, part one of the Top Ten Best Action Films of the 2000s.  Anything that premiered at the box office from January 1, 2000, to last week, counts, as everyone gives their favorites from the last 17 years.

Flicks like Expendables, Jet Li gettin' kicky, Anthony Anderson being racist, controversy over the best bike messenger movie ever made, which Bond movies count in the canon, and where does Looper fit into all of it?