Episode 293: Movies We Should Have Seen (with Garrison Ryfun)

It's time to pull back the curtains as the hosts of your favorite movie podcast, The Deucecast Movie Show, and give you some secrets... as in, Mikey, Dave and Pinky reveal to the world movies they have NOT seen. 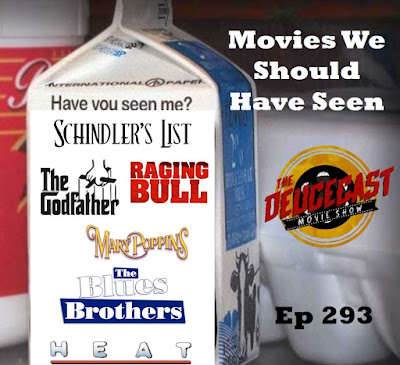 And to curb the embarrassment, they invite in Friend of the Show, Spawn of Scott Ryfun, young Garrison Ryfun to chime in with the films he's ashamed to admit he's never watched.

A round of Denzel starts the show off, and then, all talk about the movies that the guys ought to have watched by now.

Plus, what ARE the Blues Brothers running from?  What is Edward Norton's best role? Does Mikey hate Robert Redford?  Did FF Coppola get stupid after Godfather movies? What is so uncomfortable about "Deliverance"?  And how much blame does Scott Ryfun take for his son not seeing the classics?

Then... the battle of the Padawans... who has seen more films between Pinky & Garrison?