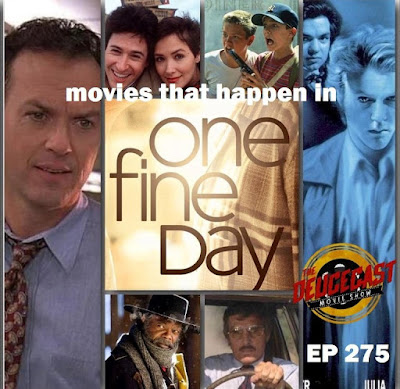 What can be done in a single 24 hour period?  According to movies, quite a bit!  That's the theme behind this latest episode of The Deucecast Movie Show, where Mikey, Pinky and Dave take on movies that take place in a day.

And who else would be in the pretentious corner but Brie Lover (both the cheese, Alison and Larsen), Wit Stillman Fan, Terrance Malick Apologist, Film Historian and (insert medical specialty here)ologist, Dr Earl!

First, the birthday movies for May, not only celebrating five years since Pinky's graduation, but also movies like The Avengers, Star Wars Episode II: Attack of the Clones, Smokey & the Bandit and of course, American Ninja 2: The Confrontation.  And, of course, The War Wagon.

The IMDb game makes a return with several actors & actresses and their film listings.  Can you guess before the guys do?

Then, single day films, all with limited storytelling... everything from a classic western to a classic courtroom drama to going to see a dead body to a Samuel L. Jackson monologue for the ages to a group of detention students to a terrorizing truck to Tom Hardy's face for 90 minutes to a September 11th narrative to a Manhattan prison to the Nakatomi Plaza... and more.

A discussion on the Stephen King Universe... in-depth look at the New Brat Pack masterpiece Flatliners... a look at Northern Exposure... Dave rails on Ferris Bueller again (sigh) and a glance at the film career of Lumi Cavazos and a look at the films of Dennis Weaver.